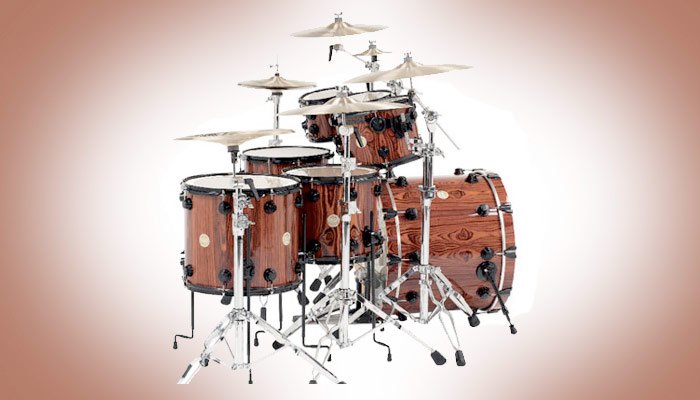 “It is great to watch the trap-drummer,” wrote music critic Strickland Gilliand in The Indianapolis Star in 1914. “One would think he kept a junk store and had gone crazy.”

In 1914, the “traps”—short for “contraption”—was a new and curious musical phenomenon. The demands of keeping time in an early 20th century jazz band had led to the creation of the drum kit.

As early as the 1890s, drummers in New Orleans were putting the snare, bass drum, and cymbals of a marching band together in a contraption for the stage, so that one drummer could play them all. American inventors did their part, providing the bass drum pedal, hi-hat stand, and an array of different-sounding cymbals.

The drum kit is an American invention, and, like America, it is a melting pot, bringing together drums and cymbals from Asia, the Middle East, Africa, and Europe.

The traps were soon popularized by inventive and virtuoso drummers. Gene Krupa and Jo Jones were followed by Max Roach and Elvin Jones in jazz, before rock drummers such as Keith Moon of The Who and Neil Peart of Rush made drumming a theatrical performance with their monster kits.

But however many bells and whistles a drummer adds, any modern kit employs a standard mix of drums and cymbals. They can be found in this six shell custom kit by DW Drums, with Zildjian cymbals and Remo drum heads. To learn more about the history of drums, read The Drum Book by Geoff Nicholls (Backbeat Books, 1997).

Anatomy of a Drum kit A double-sided drum, the bottom head of which has a “snare” stretched across it to create a buzzing sound when the drum is hit. Made from wire today, older snares were made of catgut.

History: The snare drum has its origins in 15th century Switzerland. There, it was called a tabor and was used to accompany a pipe (the “fife”) in military bands.

A cymbal with a turned-up rim that makes it look “inside out.” This shape gives a sound described as “trash,” although large China cymbals are more gong-like.

History: Along with Turkey, China has been associated with bell and cymbal making for hundreds of years. In fact, records indicate cymbals were a feature of the Chinese court orchestra at Peking in the 4th century.

A pair of cymbals attached to a medal stand that are crashed together with a foot pedal. Played with both the feet and with sticks, it is most often used to keep time. Other hi-hat techniques include playing the cymbals half-opened to produce a “sizzle” sound or kicking them against each other to produce a “splash” sound.

History: The modern hi-hat began as simply two “low” cymbals, one tied to a drummer’s shoe, and another that sat on the floor. Drummers Gene Krupa and Papa Jo Jones and cymbalsmith Armand Zildjian are credited with creating the modern “high” cymbal mechanism.

History: Again, it’s the collaboration between Krupa and Zildjian that can be credited with the advent of the modern crash and splash cymbals. In the 1930s, Krupa asked Zildjian to develop thinner cymbals from heavier marching cymbals the company had been making.

Cylindrical drums, either with one or two heads, mounted in front of the drummer. They are used for “fills” that accent the time-keeping work of the snare, bass drum, hi-hat, and ride cymbals.

History: Added to drum kits in the ’20s, the first toms were crude, with heads tacked onto shells making tuning difficult. Toms have their origin in the traditional cylindrical drums of Native Americans and Africans.

A larger, heavier cymbal that has a distinct “ping” sound when played with the sticks. Used to keep time as an alternative to playing the hi-hat, its name comes from the phrase “to ride the rhythm.” Sometimes, loose rivets are attached to the cymbal to produce a “sizzle” sound.

History: The ride cymbal is yet another result of Zildjian’s collaboration with the emergent drummers of the jazz era. The cymbal became most popular with bebop drummers such as Buddy Rich, Max Roach, and Elvin Jones.

These larger toms are usually set on the floor with three or four legs holding them up. Most kits feature one floor tom, although, following ’60s rock drummers such as Ginger Baker, many modern drummers add a second floor tom.

History: Again, drummers have to thank Gene Krupa for the floor tom and its placement. Originally, he set his floor tom between his two bass drums to the left of his snare, before moving it to its current right hand position.

A large drum placed on the floor and usually played with the right foot using a bass drum pedal to work the mallet. Some drummers use two bass drums or a drum pedal with two mallets to play double bass drum patterns on one drum.

History: A descendant of bass drums used by orchestras and marching bands, which were introduced to the West in the 14th century, and for some time were known as  “Turkish drums.”

A foot-operated pedal that holds one or more mallets to play the bass drum. It is played either with the toes, the heel, or with a heel-toe action.

History: The invention of the modern bass drum pedal is credited to German drummer William F. Ludwig. He improved on earlier versions, asking a cabinetmaker in 1908 to craft a wooden pedal that could stand the rigors of jazz drumming.

Very nice article on the history and evolution of the the drum kit. Thanks.