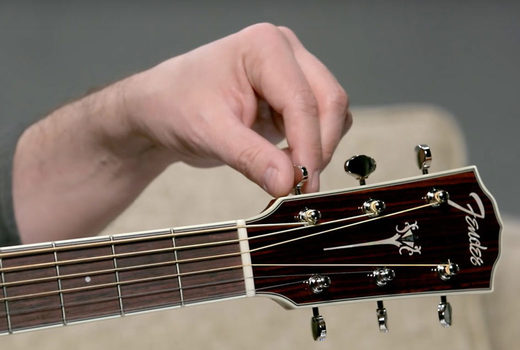 Alternative tunings are a fantastic way to reinvigorate your guitar playing, songwriting, and creativity. The instantly altered sound naturally gives your mind different creative ideas, and makes you play a different way as a result. And of course, many great songs are written in different tunings, meaning sooner or later you’ll encounter material you need to tune differently in order to play. This means it’s important to get to grips with different tunings as soon as you can. This article is all about DADGAD, one of the more common alternative tunings. Enjoy!

The clue’s in the name! The strings, from lowest to highest, should be tuned to:

D (one tone below the standard ‘E’)

A (one tone below the standard ‘B’)

D (one tone below the standard ‘e’) What’s the theory of DADGAD and how does it sound?

When all the open strings are strummed in DADGAD tuning, the resulting sound is essentially a Dsus4 chord. That is to say a suspended chord, with no overriding major or minor tonality.

A D major chord comprises the notes D, F#, and A. In DADGAD, multiple ‘D’ and ‘A’ notes are present, but there’s no F#. The G (a fourth in the key of D) creates this suspended sound. This means that the resulting sound is unresolved and broad. You’ll probably have your own words to describe the sound and meaning of DADGAD, and in fact it’s quite important that you do, but hopefully you can relate to the terms I’m using here and note that the underlying, overall sound of this tuning fits this description. Ultimately there’s no replacement for tuning to DADGAD and experimenting of course.

What genres is DADGAD used for?

Quite a lot, in many different ways, in truth. However the short answer is probably Folk. And although sometimes DADGAD is nicknamed “Celtic Tuning” because of its near-ubiquity in Celtic Folk, it is absolutely not exclusive to that, and appears in all kinds of Folk or acoustic style guitar music. The ever-presence of a drone-like ‘D’ note in this tuning can create the sense of a pedal note (essentially a constant underlying note with changing harmony on top) really lends itself to Folky styles of playing.

However, this does not negate DADGAD’s uses in many other styles of music, not least Rock – Led Zeppelin’s ‘Kashmir’ being one pertinent example.

How do I use DADGAD creatively? The key thing here is that until you’re very experienced with playing in DADGAD, you’re not really going to know your way around the fretboard too well. All the shapes and patterns you’ve learned in standard tuning no longer apply, but it’s all about turning this into a positive — it’s incredibly liberating creatively.

So often we’re not as creative as we might be, as guitarists, because we fall back on the patterns and shapes we know. This is an opportunity to throw off those shackles and attempt to be truly creative. The great news is of course that you still have all of your playing technique to call upon, but you’re not bound by repetitive tiresome chord patterns (because now you can’t even find the chords!)

Let your ear guide you, to build chords one note at a time, and move from one chord to the next, finding each note of the next shape through a combination of aural awareness, creativity, and judgement. Equally, the aforementioned ability DADGAD has to lend itself to underlying drones can be used in your favor – try creating ‘two-line’ guitar parts, and thinking about separating what you’re playing into a droning bass note and a moving melodic line on top.

Adapt yourself to the tuning, not the tuning to yourself. This is the key and the bottom line. Have fun!